Why is ‘Olympia: The Birth of the Games’ written as historical fiction rather than history? 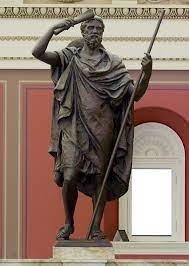 The title question heading this blog piece has been asked more than once – if ‘Olympia’ is the previously untold story of how the first Olympics came into being, why haven’t the authors just told it as history?

Well, the answer to that is twin-fold.

Firstly, as can be seen within a previous post on this Blog (the historical timeline), the first known Games took place in the year 776 B.C.E., but the invention of the Western genre of history – which was also an ancient Greek achievement – did not actually occur until some 300 hundred years later. Herodotus of Halicarnassus worked all his adult life on just one monumental work – and invented a whole new form of intellectual and literary enquiry with his ‘Histories’ – and thereby gave us the first, reasonably systematic attempt at a scientific approach to remembering ‘things done’ within a contemporary time-frame.

Herodotus (whose sculptural image is at the top of this post), sought to explore and commemorate the fateful Persian-Greek War(s) and in so doing would define this new genre as one that centred around warfare and contemporary events. His intellectual successor within this new genre, Thucydides of Athens, would then write his work in a very similar – though, arguably more ‘rigorous’ – fashion by concentrating again on monumental events that occurred largely within his own lifetime, the greatly protracted Peloponnesian War that was fought between Sparta and Athens.

Hence, for the ancient Greeks, who are our primary (and only) sources for this period of the distant past, the era we recount within ‘Olympia’ not only lacked any contemporary historians, but was only remembered as fragments and random facts by much later writers.

Secondly, while there were two possible founders of the first Games – Heracles (or Hercules, as the Romans remembered him) and Pelops – both of them are somewhat shadowy, essentially mythical figures. While this is a delightful product of the ancient Greek mythical imagination as well as the lack of any sort of contemporary history of their lives, we, as authors, had to first settle upon who was the most likely actual founder of the first Olympics and then try to reconstruct what we could of this great achievement with an eye more towards plausibility and ‘believability’ rather than historical veracity.

Thus, Pelops emerges within ‘Olympia’ alongside much better known historically-recorded figures – Koroibos and Homer, for example – as more of a ‘legendary’ character and drives towards his epic accomplishment of the original Olympics as an agent of history, rather than a truly historical ‘doer of deeds’ himself.

Taken together, then – that history itself didn’t actually exist for many hundreds of years after the first Olympics and that the founder of the first Games has to be largely ‘reconstructed’ – it should now be clear that the authors of ‘Olympia’ had to tread a fine line between what can be surmised and what is actually known of that fateful day in 776 B.C.E. in order to produce a linear, narrative-driven account of such an achievement.