A story behind ‘The Story’ 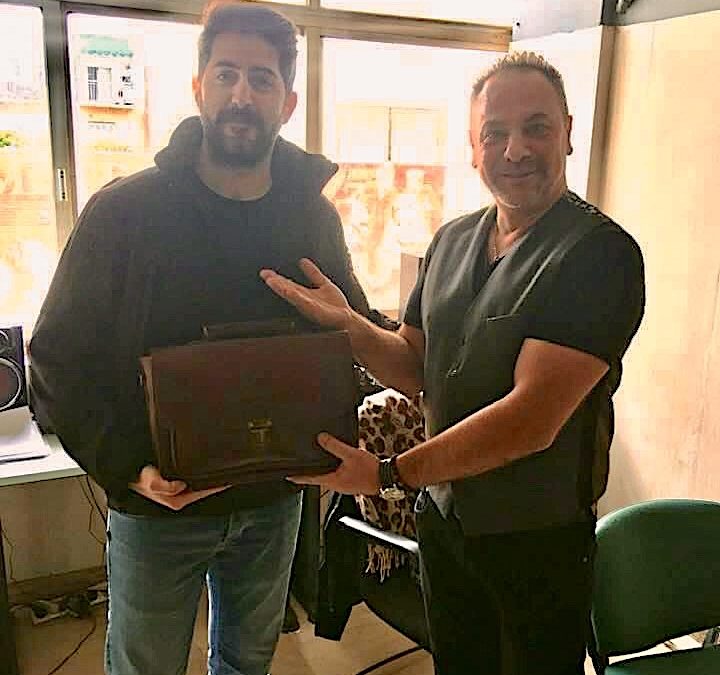 After working on the Olympia novel (and film) project for a number of years, Michael and I decided that to properly complete the work a trip to Greece was required to inject into the manuscript a real sense of atmospheric authenticity. As Michael was consumed with his day job as a senior anthropologist and I had the luxury of more time by dint of living with my disability (a spinal injury), I took the plunge and winged it to Europe in early 2020. Suitably fortified with heat-patches, nice-smelling unguents and plenty of pain-killers, I made the grueling 22 hour flight from Melbourne (via Hong Kong and then London, where I caught up with an Italian uncle and his family living there) and finally arrived in Athens. My arrival in Hellas coincided with global news breaking of the COVID-19 pestilence. Having endured so much over the centuries – including the great plague of classical era Athens, which robbed the city of one third of its residents – the Greeks were initially indifferent to this new Age of Anxiety.

I took up residence at a spectacular Athenian writers’ retreat that turned out to be owned by one of Greece’s most eminent families. The worldly sisters, Matina and Alkistis Agio – the former possessing very fine curatorial skills, while the latter held a PhD in humanistic sciences – became close ‘Socratic friends’ and we spent many an occasion eating, drinking and debating in true Mediterranean style. Both sisters were heavily involved in the Stoic philosophy revival and Alkistis hosted such forums within the spacious residence – a huge boon for a writer seeking inspiration. Each day I also ventured out to an interesting Athenian archaeological site, museum or gallery for the stimulation I felt I needed to churn out my best writing. These initiatives proved productive – five key chapters were completed at first draft level within six weeks.

On the Friday afternoon of completion – before I hired a car to venture across the country for two further weeks – I slid into my favourite watering hole for a few celebratory ouzos. With characteristic Hellenic generosity, the locals plied me with many a complimentary drink and I staggered out the worse for wear several hours later. Somewhere along the line, as I discovered to my horror when I awoke the next morning, I had been robbed of my briefcase. It contained my laptop with all of the fresh manuscript writing.

I scrambled back to the taverna to look over its security camera footage. Nothing. Recalling that my iPhone was digitally connected to the laptop contained within the briefcase, via the ‘Find My’ app’, I raced to the hardcore police station (here think of the movie Midnight Express), befriended a very diligent, bilingual super-cop I dubbed ‘Serpico’, explained to him how the tracking technology operated and – working in concert – within 48 hours we had located both the laptop / briefcase and the thief. He was nabbed outside a computer repair store, where he had been asking to have the security screen cracked open for him. The Athenian officers were very firm with him and, over a remarkably short period of time, they also managed to extract all the other missing items from the briefcase.

Drunk on success (and, later, via the fine wines I gave them by way of gratitude), ‘Serpico’ and his buddies proclaimed that this was first time in the lengthy history of Athens that a laptop had been recovered. And in record time. The new manuscript chapters were saved. [The photo at the top of this blog is of ‘Serpico’ handing back to me the well-travelled briefcase.]

Departing Athens the following day I explored the extraordinary clifftop monasteries of Meteora (where some of the Bond movie, For Your Eyes Only, was filmed), shot past a town that left me a bit gob-smacked – called ‘Martino’ – and then paused wistfully at the site of ancient Thermopylae, where Western history’s most heroic battle took place. I arrived two days later at Greece’s so-called second city, Thessaloniki, where I spent more quality time with family, my two Greek-Australian step uncles and their extended clan. Departing these festivities, I shot across northern Greece – pausing at King Phillip’s tomb, Alexander the Great’s former capital and then Mount Olympus, to thereby hail the ancient Greek gods – and arrived through the top of the Peloponnese at Olympia on March 11. The following day was the scheduled official torch-lighting ceremony for the 2020 (now 2021) Tokyo Games.

As I parked myself at a lovely al fresco café (owned, quite wonderfully, by Greek-Australians from my home city of Melbourne) on the beautifully decorated main street of Olympia, the disturbing news broke that the pandemic had now forced the closure of the torch-lighting ceremony to the public. I was, to put it mildly, crushed.

But the café owners, having recognized my Australian accent, introduced me to a gentlemen sitting only a table away (Mr Stavros Potouridis), who turned out to be not only a manager of Greece’s Panathenaic Stadium but licensed by the IOC to take photos of the torch-lighting ceremony. In the spirit of Greek hospitality, friendship and giving (philoxenia) he immediately offered to share with me some of the photos – as long as they were duly credited – as he was as disappointed as so many others that thousands of us would not be able to physically attend this special ceremony. As my Greek-language skills are unfortunately not good, I reciprocated in the universal language (of alcohol) by ordering a couple of fine Greek beers to express my gratitude.

We drank and chatted to a few other travellers who had also made the pilgrimage to Olympia to witness the event but were now, like me, sidelined by the cautionary pandemic restrictions. As we conversed, we were approached by one of Stavros’ friends, the marathon runner Kostas Hatzis (renowned throughout Europe for always completing his runs in full traditional Greek national costume, while waving his Olympic-style flag to remind spectators that the marathon is as Greek as it is Olympic), and I shared a few laughs with this very genial and humble ‘icon’. He invited me to dinner that night in the same café we were lunching at and as I joined him and Stavros, the Japanese Olympian, Minori Hayakari, also joined our table, to my great pleasure. It was quite a dinner.

Minori and Stavros departed after dinner to get some much-needed rest, but Kostas invited me to another gathering that was being held in the function room of a local hotel. Arriving there I was soon introduced to some 50 or so enthusiastic international travellers, all of whom had a vested interest in sport, the torch-lighting ceremony and the Olympics. I took particular pleasure in chatting to the U.S. YCA Youth Ambassador, Mr Atharva Vispute, and his very proud family. I also became acquainted with Assoc. Prof. Alexis Lyras (who, seconded from Georgetown University to the University of Tsukuba in Tokyo, was travelling with a troupe of sports studies students from across the globe), who has subsequently become a firm friend and now penned the Foreword to the Olympia novel that Michael and I have since completed.

The following afternoon I had the extraordinary pleasure of getting ‘up close and personal’ with the torch-lighting relay after the sun’s rays had ignited the Greek torch maidens’ ‘genesis flame’, then jogging a little alongside Atharva who was also kind enough to pose for a photo with me. It is that very same photo you will see on the rear of the Olympia novel cover, which is also reproduced below on this blog piece, as well as cropping up in various places on this website. After this opportunity of a lifetime, I took my stiff and sore bones back to my favourite Olympian café, ordered a Mythos beer and flipped open my ‘lucky’ laptop. There, at the head of a string of emails, was a publishing offer for Olympia. I whooped with joy, to the laughter of quite a few, and hastened to contact my co-author Michael, who was nearly as excited as I. I couldn’t help but blurt out that I thought I was having the best day of my life.

The following day also proved memorable, as I witnessed the actor Gerard Butler brandishing the Olympic torch in the streets of Sparta before a statue of King Leonidas – the role he played in the movie 300 – to mark the 2,500 year anniversary of the Battle of Thermopylae, but that is a story for another time and another blog piece…