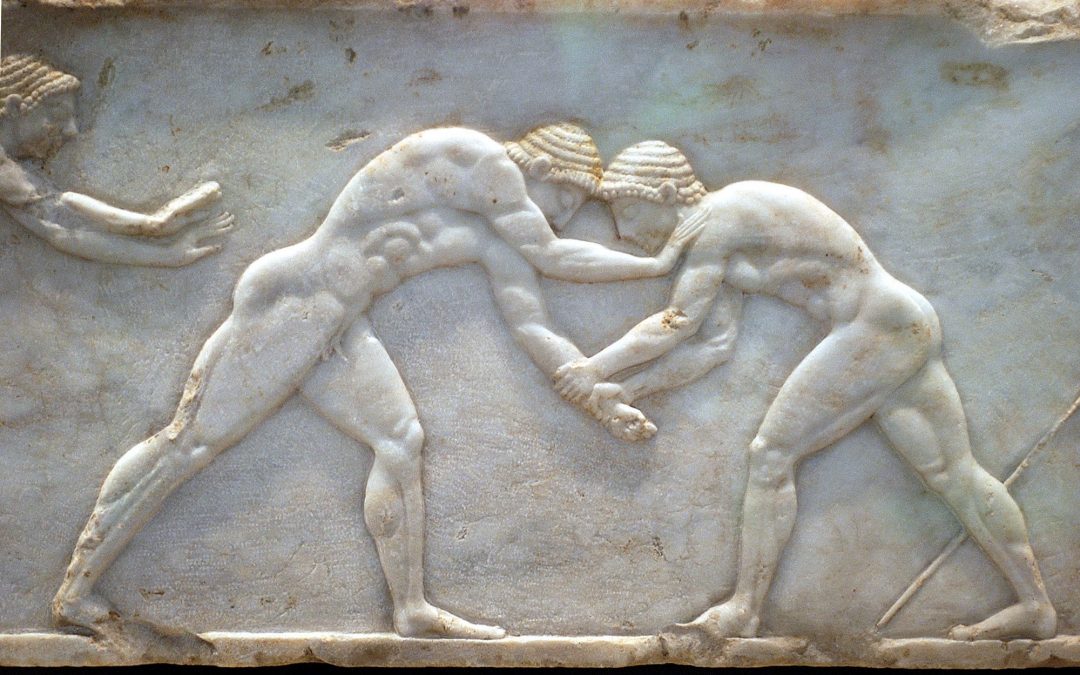 Ancient Greek wrestling, also known as palé, was the first combat sport of the ancient Olympic Games, being introduced in 708 BC. Wrestling was practiced in two main forms, one being ‘upright’ wrestling and the other ‘ground’ or ‘rolling’ wrestling. While there is no question that upright wrestling was an official Olympic event, there is much debate over whether or not ground wrestling was practiced at Greek athletic carnivals. Even so, it does appear that the two forms were both important and valued forms of wrestling as a martial art.

The rules for upright wrestling (orthe palé) dictated that there were no blows, or strikes, allowed, no biting and no holds on the male organs. Wrestlers were oiled before competing but were sometimes lightly dusted with dust to allow their opponents some purchase. A bout was won when one wrestler forced their opponent to touch the ground three times. The bouts were held in the same sandpit (skamma) used for the long jump (and later used for both boxing and pankration bouts) and were attended by two referees who used switches to punish rule-breakers and those who attempted to fight beyond the sandpit.

The rules for ground wrestling (kato palé), while having the same restrictions as upright wrestling, allowed for grappling to take place on the ground and dictated that the bout was not over until one combatant either submitted or became unconscious.

Matches between wrestlers were made in the same way as other Greek combat sports. Competitors would draw a lot inscribed with a Greek letter. Each lot was paired with another bearing the same letter, so, having drawn their lots, the wrestlers would then compete with their counterpart. There would almost certainly have been many preliminary rounds in major athletic festivals before the field was narrowed down to two finalists.

Milo of Croton was a 6th-century BC wrestler from the city of Croton in Magna Graecia (southern Italy).  Milo was so accomplished a wrestler that he was victorious six times at the Olympic Games, seven times at the Pythian Games, ten times at the Isthmian Games and nine times at the Nemean Games. His successes help to underscore the popularity and frequency of wrestling as an event in the athletic carnivals of the ancient Greek world and point towards the ability of gifted athletes to win fame and standing through the pursuit of sporting activites.