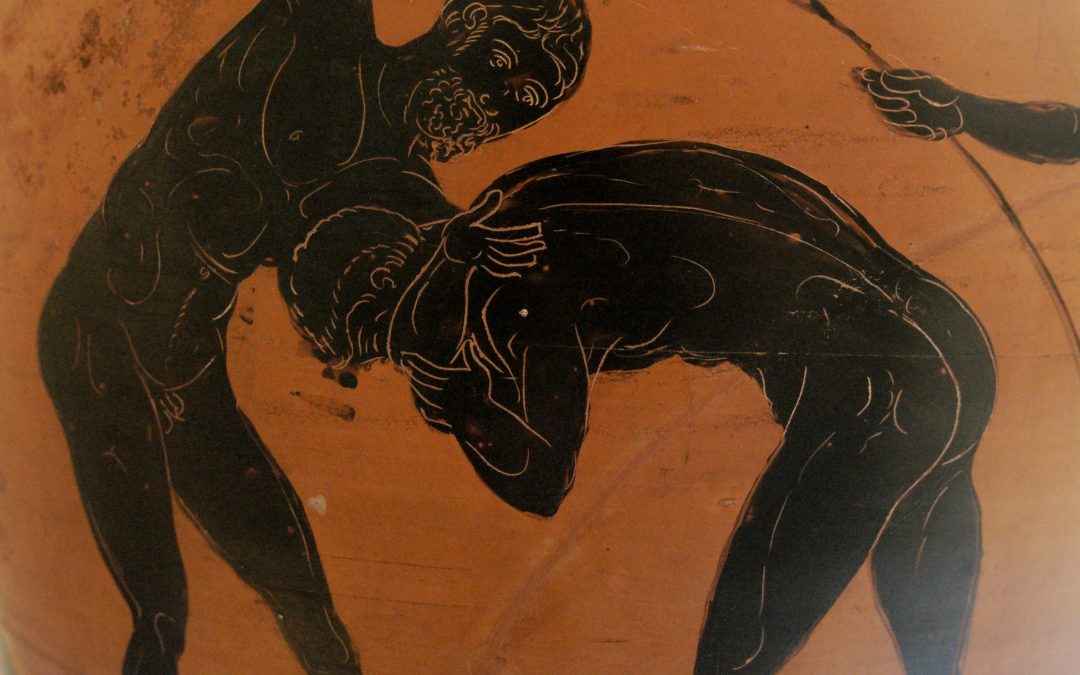 Pankration, meaning ‘all force’ or ‘all powers’, was a combat sport combining wrestling and boxing which was introduced to the Olympics. In this form of fighting, everything except biting, gouging and attacking the genitals was permitted. However, because the combatants did not bind their hands with leather straps (as did the boxers), the risk of sustaining wounds (particularly cuts to the facer) was significantly less.  Nevertheless, the pankration was a demanding and dangerous event asking much of its practitioners in the way of speed, strength and endurance.

In the same way that wrestling had two forms, so too did the pankration (upright and ground wrestling). Indeed, these ran along the same lines as the wrestling in that, in the upright form, a pankratiast was declared the victor winner when their opponent was forced to touch the ground three times. In the ground wrestling form, a pankratiast was declared the victor when their opponent was either forced to submit or lost consciousness. Of course, as with boxing and wrestling, the pankration was attended by referees armed with switches to chastise those fighters who broke the rules or attempted to fight beyond the pit.

Not surprisingly, pankration was wildly popular with spectators as it was regarded as the most comprehensive test of combat skills in the Greek sporting world. Indeed, one can speculate that the pankration combined all of the necessary hand to hand combat skills needed for the soldiery of the ancient Greek world.

In modern times, the sport has fallen into disuse but there is now a movement to revive the sport with interest growing rapidly among mixed martial arts (MMA) enthusiasts. However, while there are many who claim that the contemporary combat sport of MMA descends directly from the pankration, this claim cannot be support by the historical evidence, particularly in light of the influence of martial arts such as Kodokan Judo and Gracie Jui-jitsu, which do not share heritage with the games of ancient Greece.

Kallias of Athens, the son of Didymas, was a famous and successful pankratiast. Winning the Olympic games in 472 BC, he went on to win at Pythis twice, at Isthmia five times, at Nemea four times The Athenian pankratiast Kallias, son of Didymias, won a victory at the Olympic games in 472 BC. He also won twice at the Pythian games, five times at the Isthmian games, four times at the Nemean and once at the great Panathenaia. Having won each of the four great games, he became the first Athenian periodos-victor.

So great were his achievements that, after his victory at Olympia, the sculptor Mikon was commissioned to erect a statue in his honour at Olympia. While the sculpture itself has been worn away by the years, the inscription at its base can still be read.