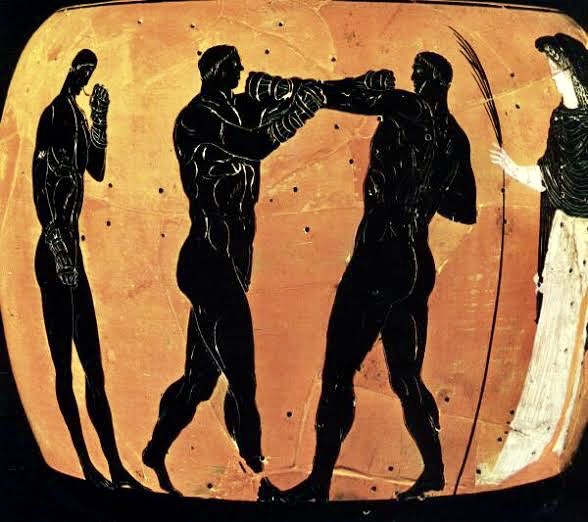 Boxing became an Olympic event in 688 BC but, in this early form, it must have been a raw experience for the fighters involved. Known as ‘Pyx’ (with clenched fist), Greek boxing had no rounds, no breaks and only ended when a fighter was forced into submission by the other or was knocked unconscious. While there were divisions based on age groups, there were no weight divisions such as there are in modern boxing. Anyone familiar with modern boxing would know that this would have led to some very interesting bouts and quite a few dangerously uneven bouts. It’s no wonder boxing was considered the most dangerous of the Olympic sports.

The ancient Greeks did not use gloves as is done today (usually 14 ounce gloves to fight with and 16 ounce gloves to spar with). Rather, they placed woollen padding over their knuckles and bound them with leather thongs. This form of boxing was conducted in a pit of soft dirt, or ‘skamma’, and a referee with a switch was always on hand to punish fighters who broke the rules or stepped out of the fighting pit.

As in today’s boxing all forms of attack other than punching were prohibited, along with low blows and modified gloves. As one can imagine, this kind of close quarter non-stop boxing was both spectacular and dangerous and fighters would often be permanently scarred from their bouts.Boxers trained using punching bags and regular sparring and were famed for their courage, strength and endurance.

One famous ancient Greek boxer was Diagoras of Rhodes. Diagoras won the boxing at the 79thOlympiad in 464 BC but he also won the Pythian Games, the Nemean Games and was a four time champion of the Isthmian Games. Diagoras’ three sons Damagetos, Akousilaos and Dorieus were also Olympic champions in their day, as were his grandsons Peisirodes and Eukles.

‘’And now, with the music of flute and lyre alike I have come to land with Diagoras, singing the sea-child of Aphrodite and bride of Helios, Rhodes, so that I may praise this straight-fighting, tremendous man who had himself crowned beside the Alpheus and near Castalia, as a recompense for his boxing…’’ (Pindar, Olympian 7, Lines 13-17)

Indeed Diagoras was victorious at every major Greek athletic festival and came to be praised for his humble and virtuous character as much as for his boxing skills, for good character and an honourable nature were the keystones of ancient Greek culture.